In Which We See Our Selves: American Ghazals

The Ghazal is an ancient Arabic form that uses two-line stanzas, the second of which ends in a refrain: a repeated phrase. Like other refrain poems such as villanelles and pantoums, the point is to play with the refrain, to give it new meaning and context each time. Because Ghazals have so many refrains, the repetition itself is not exact, but playful, using rhymed substitutions for example. Besides the technical aspect, Ghazals traditionally are associated with love and lamentation.

Torgerson’s poems do all that and seem quite American as well. Consider the opening lines to “Before”:

I’ve heard the ringing of this bell before,
I never dreaded what it might foretell before.

Living with real if ordinary dangers,
I never had such fears I couldn’t quell before.

A bell here is a fitting subject for the droning sound of a refrain poem. The poems are more playful then melancholy on the whole. The poet imagines himself an imposter superhero in “Eric America.” Other poems visit the edge of cliche, such as “For a Change” which begins with the banal lines: “Let’s refuse to play the game for a change. / Suppose we live what we proclaim for a change.” And it ends with the self-deprecating persona departing on a horse: “Your poet mounts his tottering white horse / and hobbletrots off, not speaking his name for a change.” (And sadly, none of the refrains contain the word “hobbletrots.”)

But it’s difficult to represent the poems with mere snippets. The form depends on the sum total of the refrains, the net effect of the tone of the poem: these poems are meant to be read aloud. 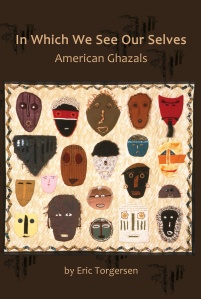